You are here: Home1 / Biography2 / Childhood

This biography was written by the composer in Warsaw, Poland, on 20th November, 1995 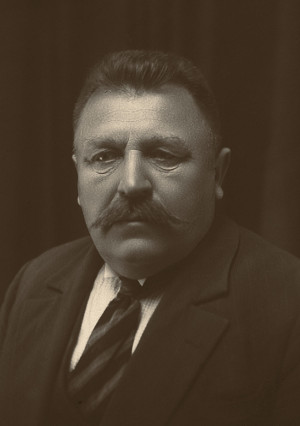 My father Teofil Paciorkiewicz was a milling master recognised in Sierpc and in the Sierpc district in central Poland. My mother, Józefa nee Frejlich, ran a tailor’s shop which was very popular with the ladies from the town and the surrounding area, in addition to rearing her eight children (two died in infancy).

I was born in Sierpc on the 17th of October 1916 as the eighth, youngest child. Alfred, my eldest brother, of whom our parents were very proud, finished the famous Małachowianka high school in Płock and went to study law to Vilnius. Shortly, however, he changed his mind and moved to Poznań to study medicine. After he had completed his studies, he opened a physician practice in Daleszyce near Kielce, which he would then move to Starachowice, Wieluń and Opoczno. My sisters, Jadwiga and Maria, attended the local girl’s high school of Mrs. Piniarewiczowa.

For lack of funds, however, they had to stop their learning and take care of the house and the younger children after our mother died in 1920. My mother passed away during the difficult post-war period, and her death submerged our house in painful poverty [1]. My elder sister Jadwiga got married, and Maria was sent to the Teacher’s College in Plock, because by brother Alfred had convinced our father that being so talented, she should continue her education. This decision was right, because Maria really was very talented and also very diligent. After she had finished the Teacher’s College in Płock, Maria worked for various village schools, and just before the second world war, she got married. When the war was over, a widow now, she finished higher mathematical studies in Warsaw and started to work as a teacher at the Stanisław Konarski Mechanical School in Warsaw where she worked until she retired. The other two brothers, Kazimierz and Józef, got practical vocations. Kazimierz established a butcher’s shop and Józef opened a confectionery.

My childhood after mother’s death was very difficult. Without her attendance, I had to go through almost all possible diseases. After I finished comprehensive school, I stayed for one year with my father and I helped him at home. At that time, it occurred to father that I should go to the Bishop’s Organists School in Płock. At home, we had cultivated music and song amateur style. My father would encourage us to sing together and he even sent us to violin classes. Now, I was to learn to be a professional musician. I passed the exam successfully.

Becoming a musician
Scroll to top